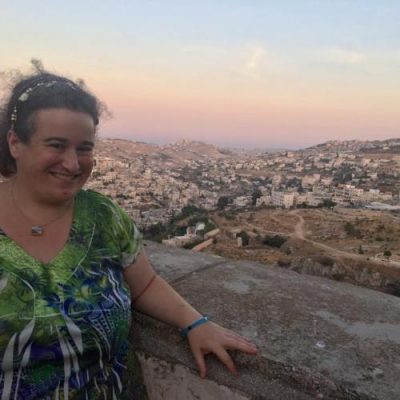 My first New Year’s Eve in New Jersey was traumatic. Don’t worry–it was almost thirty years ago and it has evolved into a faded memory of a milestone long past–but the moment is important for the sake of contrast.

It started well enough: dinner with a college friend at Pizza Hut followed by a Mary Poppins singalong party in my studio apartment off Route 22. Then the phone call came: Dad was in the hospital after a heart attack. With a surge of adrenaline, I went into Emily Emergency Mode. Before I knew it, I was in the car driving toward Staten Island. Christina, my college roommate, drove her car right behind me, heading farther east to her family but also close by in case I needed support.

This was in an era before EZPass. Remember those tokens for going over the New York bridges? Remember singing “Put the coin in the basket, in the basket” to the tune of “If you’re happy and you know it, clap your hands?” You needed a coin or exact change to get into New York.

Even worse, it was several years prior to the prevalence of cell phones. Once on the road, the only way to seek help would involve abandoning a car and walking to the nearest pay phone. And that pay phone would be…of course…coin operated.

Well, I needed a token and some support. It turns out that I had left my pocketbook at the Pizza Hut earlier that evening. In the pocketbook were my ID cards, my money, and yes, plenty of Outerbridge Crossing tokens. Of course, I first realized this when grabbing for the coin at the tollbooth. There was nothing on the passenger seat. No pocketbook. No wallet. No token. No phone.

Those were the days of my waterfall eyes. I must have held up traffic while crying at the tollbooth, unsure of what to do. A vision of being arrested and on the front page of the New York Times flashed before my eyes. I wondered if I’d have to serve jail time. I worried that I wouldn’t see my family again. (Did I tell you I was very young? Do you know that I have a wild imagination?)

Luckily, Christina was in the car behind me. She spotted me the toll fare and I made it to my parents’ house to greet the arrival of 1996. Dad made it through that heart attack and several others, had quadruple bypass surgery a few months later, and is still cracking jokes in his eighties.

And yes, I was reunited with my pocketbook a few days later. They held it for me at the Pizza Hut. However, all the cash was missing. In its place was a sheet of loose-leaf paper with the handwritten phrase: “Finder’s Fee.”

As I said, this story is all for contrast. Last night, I had a similar occurrence and it highlighted for me what a marvelous community and greater community we have.

The situation last night was similar, you see. Similar, but much improved. As in 1995, I went out for Italian food with a friend. However, I hope you’ll agree that Cafe Maria has a bit more panache than any old Pizza Hut.

As in 1995, dinner was followed by a singalong party of sorts. True, nobody can compare to Julie Andrews or her 99.9% perfect alter ego, but this singalong came close. It was the second rehearsal of the Interfaith Thanksgiving Service choir, and the Old Stone Church was filled with laughter, music, and budding friendships. We even had some time for friendly joke-telling after rehearsing “One Day” for Sunday’s evening service.

And, just as in 1995, I lost something of material value to me. Luckily there was no ominous phone call about any medical emergency to break the mood. Unluckily, the problem du jour was no longer a missing token but rather a lost phone.

My pocketbook of the nineties has been replaced by a smartphone wallet. Usually, I carry one with my signature sunflower pattern, but my week-old iPhone has a more subdued, pastel case.

After a jolly rehearsal, the church was filled with friendly banter, and I was aware that some musicians from a partner church had found a phone that one of the singers had ostensibly left there. I didn’t pay too much attention (silly me); I was more excited about choosing the key for a song for Christmas Eve. We musicians are always thinking a few weeks or months ahead!

Eventually, it was just one choir friend (Susan Meacham) and me left in the Old Stone Church. We were packing up to leave. There was my iPad, the music, my jacket and keys. But where was my phone? I stepped over to the pew from where I had recorded the last run of the song, and then it hit me: the ‘found phone’ was actually mine! These people with beautiful intentions found a problem where there was none and were so eager to help that they didn’t open it to see for sure whose phone it was.

If you know Susie like I know Susie, you can imagine her tone as she uttered, “Well, now what?” Just like Christina was able to help me go through the tolls, Susan was able to help me with the phone calls. (Just for the record, she has a fabulous phone voice. I will never have that much poise!)

I used the Fellowship WiFi to find the email of one of the gentlemen who had been a loyal interfaith singer and correspondent for the past three Novembers. I knew his name (Duncan) and from the email, I was able to ascertain his surname. A few google searches led to his home phone and then his cell phone…but who picks up their cell phone anymore? We have just survived the election cold-call season, and the caller ID would be an unknown name.

Fortunately, Duncan called back. He gave us the names and phone numbers of a few possible phone-rescuers, and we continued our quest with these new avenues of hope. Our next call was to Carol, one of the singers. Apparently, she was the person whose phone they thought it was, so she did not have my phone.

Carol was in her garage, “EEKing” away from a rat who had decided to visit, but she was able to tell us about Bill, the gentleman who was going to be bringing the phone back. Through speaker-phone, I offered her the services of FrankieCat. We commiserated over the loss of our preferred candidate, and lamented that our joke-telling skills were not as finely tuned as her husband’s. We had only met a few hours before, but there was a sudden connection that came from shared music, laughter, and chaos.

Finally, Susan was able to make contact with Bill. It’s good she called him; he was actually not coming back to the church, but was in fact outside of my house in Somerset County. He had gone a good half hour out of his way to bring me my phone, and was waiting for me to show up. Actually, he was also wanting to make sure it was the right house. One of the digits in my house number has a faulty nail, and an upside-down 2 looks a little bit like a 7. Again, we laughed and connected in such an unexpected way.

The stars were crisp and endless, a November Leonid sky. Susan accompanied me to my car with the glow of her cell phone flashlight and then dimmed it so we could find Casseiopeia, the Pleiades, and of course, winter’s rising Orion. It was another beautiful UU moment.

When I moved to New Jersey, I knew not a soul in the state. The world felt unfriendly to me; strangers would help only for a finder’s fee. A new year began with angst and trauma. Now, though, my home is a place of connection. Our FUUFHC home is a place of connection, and I am at home here. We help each other, and we connect with others who help each other. We sing together, and light the way for one another, and look out at the same sky with our own eyes, our own hopes, our own memories and visions.

E.T. wanted to phone home. E.B. (Emily Bengels) wishes she could phone back to her 20-year-old self and let her know how much joy lies ahead. Unfortunately, that Emily doesn’t have a cell-phone and probably wouldn’t believe me if I told her about the kindness of my close and extended community in 2022. She’ll have to wait to meet all of you when she grows up!